Twickenham - Welcome To The Cabbage Patch

Think Twickenham and you think rugby. The stadium is often regarded as the home of rugby union. Today, it’s the site of the England rugby team’s home matches, as well as hosting the Middlesex Sevens and selected European Champions Cup games, among other clashes.

Although it’s now able to seat a massive 82,000 spectators, the stadium was originally built on a market garden in 1908.  Hence, it’s sometimes referred to as ‘the cabbage patch’, although to many rugby fans it’s simply ‘Twickers’. If you get tickets for an England game, you’ll find the stadium has a unique atmosphere on match day, which starts even as you approach the ground. Once inside, the distinctive roar and singing of ‘Swing Low Sweet Chariot’ makes the Twickenham experience one of the most memorable in world sport.

Not visiting for a match? There’s still plenty to see and do, from behind-the-scenes stadium tours to visiting the World Rugby Museum, which boasts over 25,000 pieces of memorabilia.

When there’s no rugby being played, some of the biggest and best names in music take to the turf at Twickenham.  The Rolling Stones, U2, Lady Gaga and Rihanna are just some of the acts who have played at the venue.

If you’re heading to a show, Twickenham is easy to reach by tube, train and bus while Heathrow Airport is less than 10 miles away. 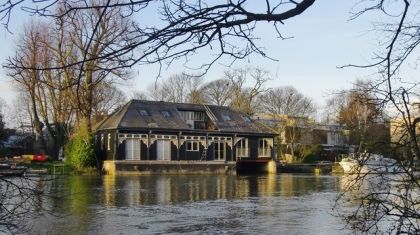 The area around Twickenham is fascinating in itself and steeped in history. Strawberry Hill House, for example, is a little Gothic castle built by Horace Walpole, a famous politician and writer from the 18th century. The house is open to the general public.

You’re also only a very short boat ride, or bridge walk, away from Eel Pie Island. An actual island in the middle of the River Thames, this small, inhabited space has a rich music heritage and has hosted gigs by many of the most famous names in music. It’s a fascinating place to visit.

In general, the Twickenham area is buzzing with interesting shops, pubs and things to see and do. Plus, of course, the rest of London is on your doorstep for those who want to sample the many delights of a leading international city.

Whether you’re going to the rugby or simply visiting the area, we’ve got a great selection of hotels nearby.

Best Western Airlink Hotel London Heathrow offers convenience to those arriving by air. It has a comfortable, modern feel and good transport links make it easy to reach Twickenham and beyond.

Best Western Plus London Wembley Hotel is perfect for both football and rugby fans and you can combine a visit to both major stadiums with exploring the rest of London. The hotel is beautifully designed with a contemporary feel.

Best Western Plus Vauxhall Hotel is a boutique hotel based just south of the Thames. It’s great for those who fancy some shopping along Oxford Street.

Whether you’re a rugby fan or simply want to experience a major slice of British culture, you should grab the ball and run with it and book your ticket to Twickenham.