Edinburgh Castle - The Jewel In The Capital's Crown

Did you know Edinburgh Castle was built on a 700 million-year-old volcano? It’s happily long since extinct, and there’s been a royal residence on what has become known as ‘Castle Rock’ ever since the 12th century.

The castle that looks out over Edinburgh today is made up of buildings dating from the 12th to 18th centuries and if the walls could talk, they’d definitely have some amazing stories to tell. Home to many kings, queens, lords and ladies – including Mary Queen of Scots, Robert the Bruce and Bonnie Prince Charlie – it’s a place of drama, great events and tragic stories.

The home of amazing events

Some amazing events take place within the castle’s walls, from concerts to plays and historical re-enactments.

The pick of the bunch is undoubtedly the Royal Edinburgh Military Tattoo, which brings together musicians and performers from across the globe for a spectacular show every August.

Discover the castle’s rich history for yourself

You can learn all about the castle’s rich and varied history on a fascinating guided tour, or take the chance to walk around at your own pace. Don’t miss the lavish Great Hall, with its armour-lined walls or the Crown Room, where the crown jewels are proudly on display after years of being hidden from the English.

Another must-see is the Stone of Destiny, where Kings of Scotland traditionally sat when being enthroned. The stone was only returned to Scotland in 1996 and is a proud symbol of the entire nation.

You can even take a stroll through the underground dungeons – if you dare. After all, Edinburgh Castle is known as one of the most haunted spots in the country…

Who needs Game of Thrones when you have Edinburgh Castle? This stunning piece of living history stands like a trusty guard over the city, just as it has for centuries.

With its origins in the 12th century, this is a castle with endless stories to tell. Whether it’s the fascinating tales of Mary Queen of Scots or the tragic plotting of Bonnie Prince Charlie, it’s hard not to get a sense of importance when surrounded by such company.

We’d highly recommend a guided tour around the castle to be sure you’re not missing the full juicy details, but you might prefer to explore freely by yourself, simply taking in the breathtaking sites and lavishly-adorned chambers. 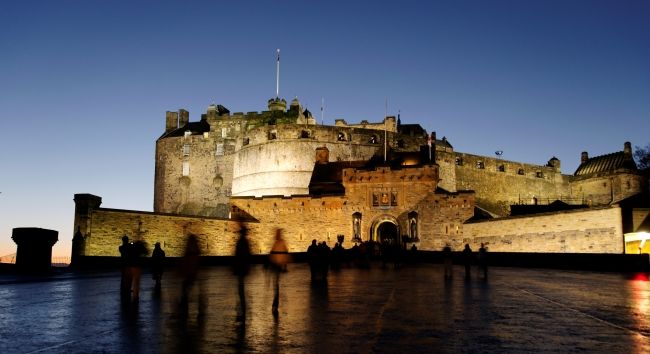 Get up close to Mons Meg, one of the largest guns in Medieval Europe. You’ll also be within touching distance of the Stone of Destiny, upon which Scottish kings were once ceremoniously crowned.

If you get lucky, you might even stumble across a major event, such as the annual Military Tattoo or a concert, where the music can be enjoyed against the jaw-dropping backdrop of the city. Like all world-class attractions you’ll find some great places to eat as well as a gift shop, so you can take your memories back home.

However you choose to do it, just make sure you don’t miss one of Great Britain’s greatest castles.

Beyond the castle walls – explore all Edinburgh has to offer

Edinburgh Castle can keep your attention for days, but the city itself is one of the greatest in the world with its own unique culture, history and atmosphere.

Where to start? Maybe visit the Royal Yacht Britannia, walk around the Royal Botanical Gardens, enjoy a whisky-tasting session, visit the marvellous zoo or head to Princes Street where you can shop until you drop, enjoying the view of the castle in the distance.

During August you can experience the world-famous Edinburgh Fringe Festival when the city is packed full of artists, comedians and tourists. There’s nothing else quite like it, anywhere.

There are many backstreets to explore and tours to join where you learn the history of this fascinating city.

Where to stay near Edinburgh Castle

We’ve got a great collection of hotels in Edinburgh to make your stay in the Scottish capital even more memorable.

Within walking distance of the castle you’ll find the Best Western Plus Edinburgh City Centre Bruntsfield Hotel. This Victorian townhouse overlooks Bruntsfield Links Park, so you can enjoy open greenery while still being near plenty of city centre attractions.

Best Western Kings Manor Hotel Edinburgh is close to the picturesque harbour and golden sands of Portobello Beach. It’s also a short trip to the Scottish National Gallery, where you can enjoy one of the world’s greatest collections of fine art.

Also within a short stroll of the castle, there’s the BW Premier Collection Ten Hill Place Hotel. Tucked away in a traditional Georgian square, this modern hotel is perfectly located to enjoy all Edinburgh has to offer.