Home Of The Lion - The Lyceum Theatre

One of the most prominent theatres in Great Britain, today the Lyceum Theatre offers centuries of history that demand to be explored before settling down and watching the contemporary musical blockbuster that is the Lion King.

Since 1765 there has been a Lyceum theatre in London’s Covent Garden. It’s current incarnation dates back to 1904, although it was almost closed in 1939 with the final hurrah of Sir John Gielgud in a production of Hamlet. It reopened after the war as a ballroom and played host to massive names from the world of music such as Pink Floyd, Led Zeppelin and Queen. Prince played his first UK gig there.

It’s a truly historical theatre with a varied and fascinating past. Bram Stoker, the author, of Dracula, was once its business manager and it hosted the first ever exhibition of Madame Tussaud’s waxworks at the start of the 19th century.

Sit back and enjoy The Lion King

The Lyceum has been the home of the Lion King since 1999. This stunning production, based on the Disney film of the same name, pulls in visitors from around the world who want to enjoy the antics of Simba and co and sing along with The Circle of Life.

A special Behind the Scenes tour can provide an insight into how the production is created.

Like many London theatres, there are various tiers to the seating. If you’re planning on seeing a show then you have a choice of getting close to the action or sitting high up in the Grand Circle. All around you’ll see beautiful and richly ornamented interiors. However, extensive refurbishment means it is very much a venue for the 21st century. 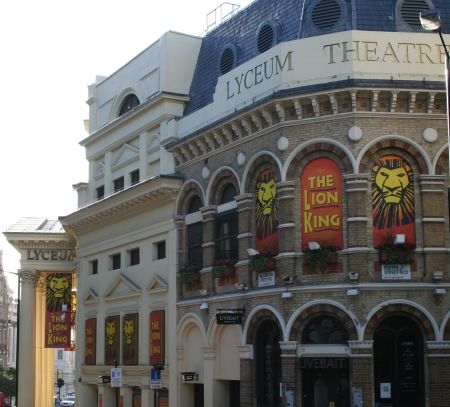 Things to do around the Lyceum Theatre

When you come out of the theatre you’ll find yourself in the heart of Covent Garden.  World famous, it is rightly known for its rich variety of shopping food and culture. There are plenty of museums, galleries and places of interest to visit in the area as well as lots of options for grabbing a pre-theatre bite to eat or post-show tipple.

The central location means that choosing what else to do will be the hardest part of your trip. Whether it’s the Royal Opera House, the amazing Covent Garden Market or the London Transport Museum, we guarantee you won’t be bored.

Where to stay near the Lyceum Theatre

Best Western has all the options you need for a great stay in London that will give you easy access to the Lyceum Theatre and surrounding areas.

Best Western Plus Delmere Hotel has innovatively designed, air-conditioned rooms with relaxing rain showers, media streaming, large smart TVs and touch-controlled mood lighting. It makes for a chic base to explore the city.

Best Western Victoria Palace hotel in Central London offers a modern and cosy break in the capital. You’ll enjoy a prime location within walking distance of many of the city's most celebrated attractions.

Best Western Corona in London boasts all the modern convenience you’d expect, with a warm and friendly approach to customer service not often found in the busy capital. An elegant Victorian conversion, the hotel is centrally located.